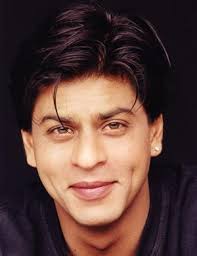 Shah Rukh Khan widely known as "SRK", is an Indian film actor, producer and television personality. SRK is also called "BADASHAH OF BOLLYWOOD" and "KING KHAN". He acted in more than 80 films in Bollywood. He is the well known actor of Asia. King Khan started his career by acting in television serials.

He stared acting in films in 1980's. His 1st film was DEEWANA later acted in many films. SRK was acted in a negative role some of them was "DARR, BAAZIGAR and ANJAAM". Then came the time to see KING KHAN as an Romantic hero some of them are the golden and ever green love storys such as "Dil tho pagal hai................."etc.

King khan was married to Gauri Khan that was an inter caste marriage. Then he earned typical possitive apprecation for being an alcoholic in the movie Devdas ther he shared the screen with 2 heroines. Even King Khan made a trend setting movies such as SWADESH , CHAK DE INDIA!.................even King khan made films for families such as "kabhi kushi kabhi gham" with a caption of "its all about the love for ur parents" which empressed every heart who watched the movie.

He was mostly named as "Rahul" in his movies many rumours were heild that King khan is to change his screenname as Rahul. King khan is the co-owner of the Red chillies entertainment and Kolkata knight riders.He won many Film fare awards and National awards for his struggle SRK became the hearts of many girls even now he also impressed family fans.